Report on beekeeping in the Netherlands

Honeybees in the Netherlands live in a moderate maritime climate. This means that the summers are cool and the winters are mild. Because the Netherlands is on a dividing line of the western airstreams coming from the sea and eastern airstreams coming from the European mainland, the weather patterns are strongly fluctuating in all seasons. The weather is highly unpredictable with rainfall throughout the year. On average precipitation occurs 7,6% of the time, be it as rainfall, hail, snow or fog. Below are two long term averages that give a good impression of the circumstances in the Netherlands.

The map shows the regional rainfall that, as you can see, varies substantially in some areas. Although we have a flat country, there are some landmarks which influence the weather. Rivers, lakes and forest play a big role, but even the main soil in an area has an influence. 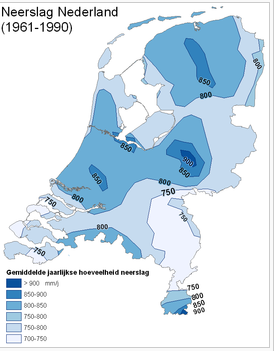 These long term averages give a reliable view of the Dutch climate. But depending on the main direction of the wind, be it in summer or winter, extreme deviations from the averages can occur. These extremes are mostly short term. The highest temperature ever recorded in the Netherlands was 38.6 degrees Celsius and the coldest temperature -27.4 degrees Celsius. (101.5 °F, -17.3 °F)